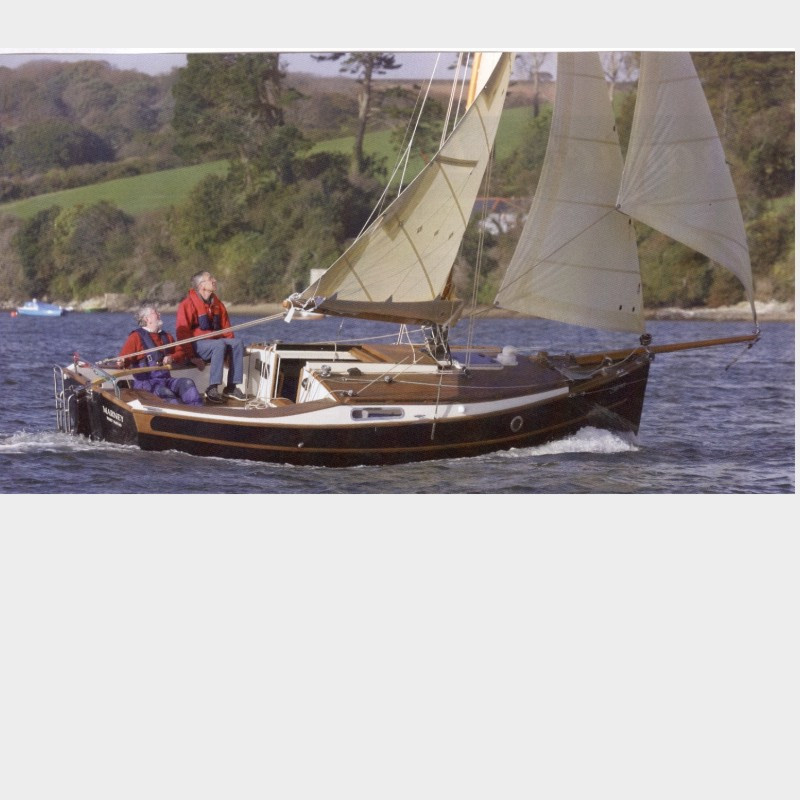 Plans are usually shipped by the designer with USPS (Airmail US Postal Service). For more info see our shipping page

Pretty, and quick too! 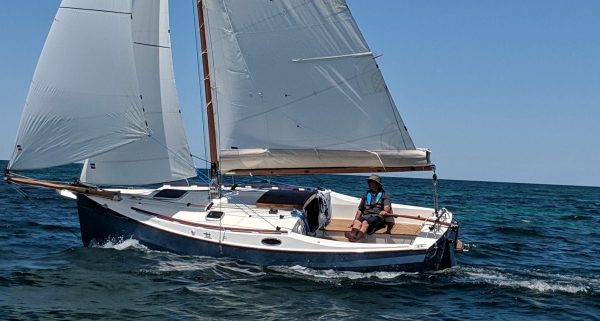 The lapstrake plywood Cape Henry 21 developed naturally out of the Cape Cutter 19, a GRP trailer sailer that has become very popular in a short time and has sold 70 boats in its first 2 years in the UK market. The 19 proved to be a boat that is full of character, able and seaworthy, with a surprising turn of speed.The appeal and success of that little boat brought a steady stream of requests for similar boats in larger sizes, to 30ft LOA and beyond. The concept of the 19 will work in slightly larger sizes but becomes less practical as size increases. I chose to rework the concept at 21ft to produce about 1/3 more boat in terms of volume and displacement, with resulting benefits in space, stability and performance. Above this size, many prospective owners expect standing headroom, which requires considerable change in the concept.The Cape Cutter 19 was named after the Cape of Good Hope, where I have lived all my life at the tip of Africa. The Cape Henry 21 is named after the Southern promontory at the mouth of Chesapeake Bay in USA, my home from January 2004.

The hull is styled after the traditional sailing craft of England, which have spawned many modern interpretations of the basic concept. It is lapstrake plywood in construction, with carefully proportioned curves and strake widths to produce a pretty hull. In lapstrake hulls the chines are accentuated by the step in the joint, so an unfair line looks very ugly.

When I was designing the Cape Cutter 19 I found that I could easily fair the chines in my CAD programs but had problems visualizing the proportions of the panels relative to the overall profile and each other. I did not feel confident of producing a hull that would look good from all angles, so I returned to the old steam powered drawing board to draw the basic lines. After that I went back into the CAD programs for minor tweaking of fairness and to produce 3D rendered images so that I could look at her from all angles. The result is a boat that is attractive from wherever she is seen. 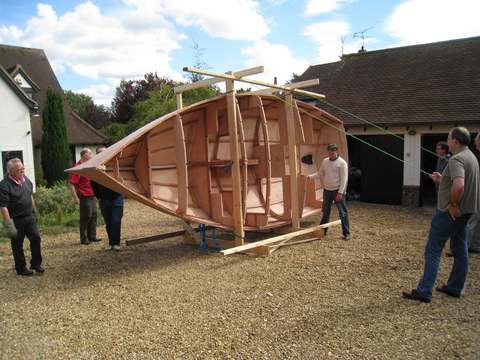 The Cape Henry 21 is built over permanent plywood bulkheads and has a plywood backbone that runs from the stemhead through to the start of the centreplate case. The backbone and bulkheads interlock into each other egg-crate fashion, making set-up an easy task. This backbone provides longitudinal stiffness to the forward part of the hull. The centreplate case and a solid timber shallow full keel, which runs through to the engine well against the transom, provide stiffness to the rest of the hull. 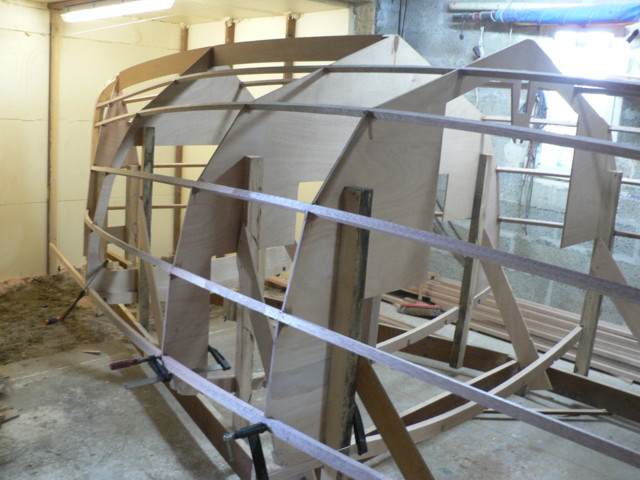 This hull is also stiffened structurally by stringers at all chines. Although epoxy filleted and glassed joints would have done the job, it is more difficult to build that way due to the panels flexing while shaping is being done in preparation for the next panel to be fitted. Professional builders have probably got work-arounds for these situations but my concern was to make the job as simple as possible for inexperienced builders. I have detailed stringers at all chines, which give a firm base on which to work when shaping and fitting panels. They also supply a fair line for establishing correct shape and fit of the panels. 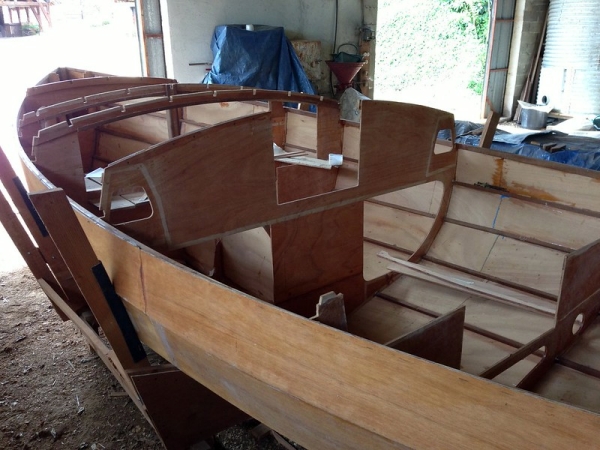 Another concern was that a stringerless joint has the strength to withstand the pressures applied by the sea on the outside but not potential loads applied from the inside. A heavy person flopping down against the hull when using the quarter berths as seats can load the joint so that it cracks on the outside, with potential leak and future structural problems. A layer of glass on the outside of the joint would strengthen it but is not a simple task on a lapstrake detail. I chose the stringer as the more user-friendly option. Firm cushions fitted between the stringers from galley to cockpit will allow this area of the quarter berths to still be comfortable as seats. 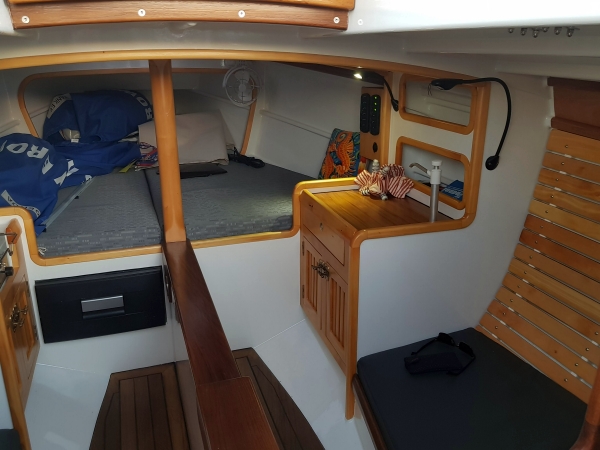 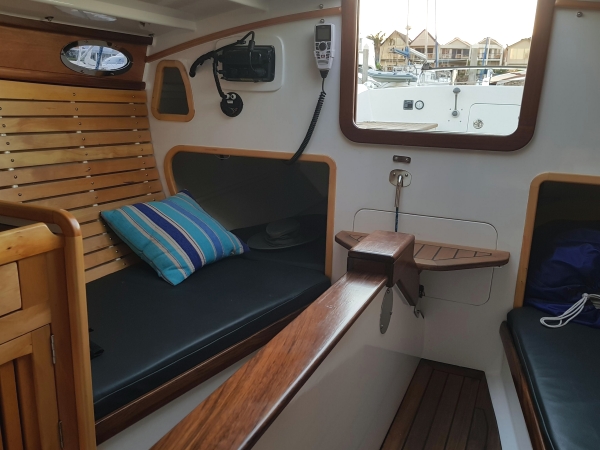 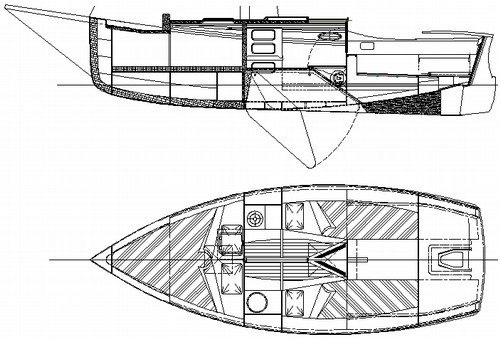 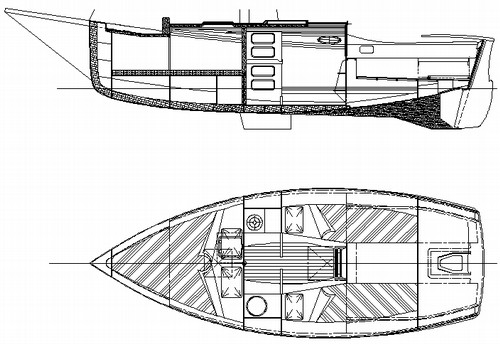 The hull has good performance characteristics. It is almost all waterline length, a sure way of improving speed for a given weight under most sailing conditions. 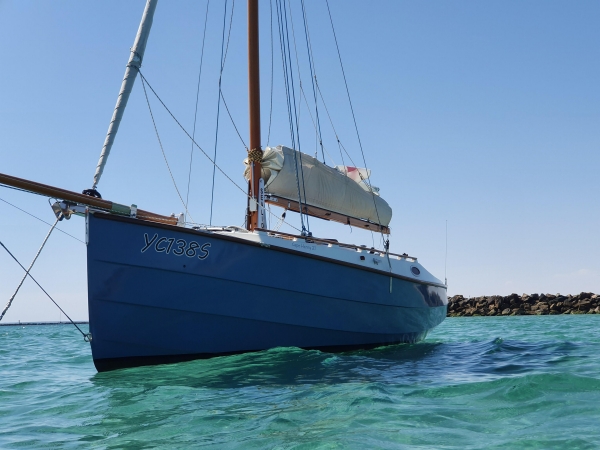 It is fairly fine up front at the first chine, with a hollow to the curve of the waterline. This gives good penetration to punch to windward through waves and wind chop. Flare to the upper sections and a broad forward deck give reserve buoyancy for dryness and decent interior accommodation. 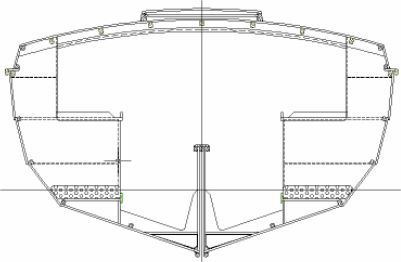 Aft she is quite beamy to make her forgiving downwind. This also gives the ability to carry the cockpit loads without excessive changes of fore and aft trim. 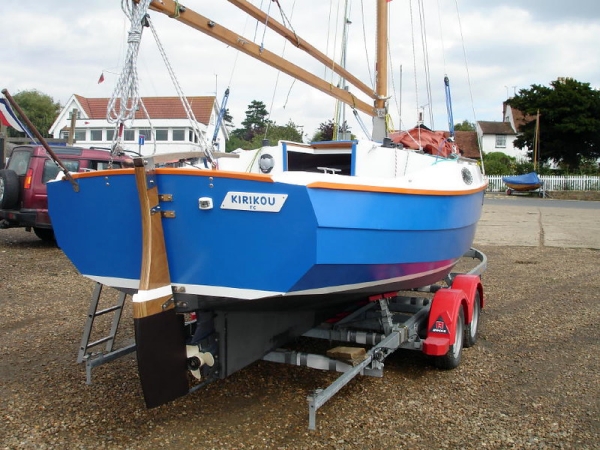 as in many boats of this type and these dimensions, the outboard engine is placed in the cockpit with a cradle passing between the flooring  and the bottom of the hull, immediately aft of the keel. A very practical and safe solution for maintenance, with the propeller always in the water but safe from knocks or cavitation. 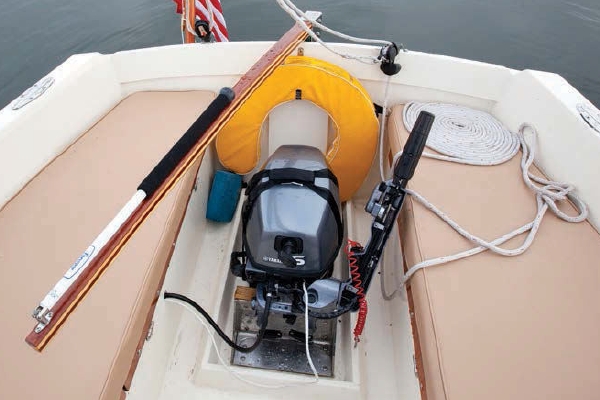 This rig looks like conventional cutter but is not intended to be sailed with both headsails at the same time except when reaching. To work well together with a staysail, the jib needs to be a Yankee, ie a high-clewed high-aspect working sail. Instead, this rig has a large genoa on the end of the bowsprit for use as an all-round headsail in light to moderate conditions. It is set on a roller furler so that it can be doused without crew having to venture out onto the bowsprit. 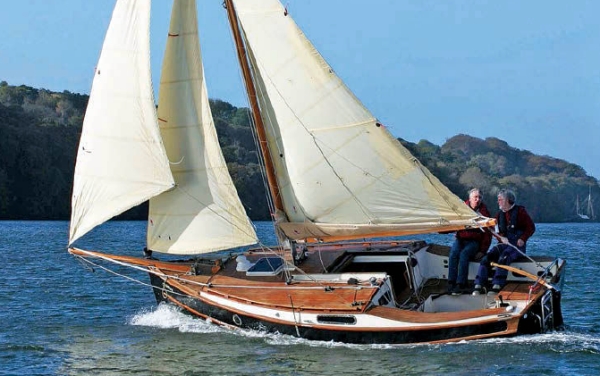 The sail that is tacked to the stemhead looks like a staysail but is really a working jib for heavier conditions. It brings the rig inboard for safety when the weather gets rough. If used as a staysail along with the genoa, it will choke up the slot a bit unless the heading allows sheets to be cracked off.
The bowsprit is hinged on the foredeck so that it can be folded aft to lie along the deck when not in use. This is most likely to be done for access to tight moorings and for trailing. The main forestay is the one to the stemhead, so she can be sailed with the bowsprit shipped. 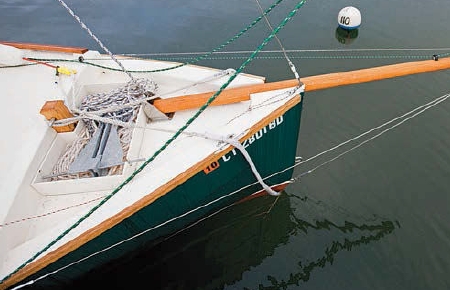 The mast is hollow timber, fabricated by the birdsmouth method. The mast is light enough to be raised by two people without mechanical aids.

The boom is goose-necked to the tabernacle rather than to the mast, allowing the mast to be dropped without removing the boom. 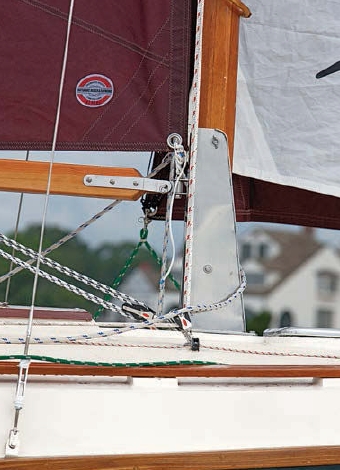 The mainsail is a high-peaked gaff, which gives good efficiency without a topsail. The low aspect nature of the sail plan allows her to carry a lot of sail, more than is normal for similar size boats with more modern rigs. The result is surprising performance in light to moderate conditions. There is also a marconi rig option for those who prefer it to the gaff rig. 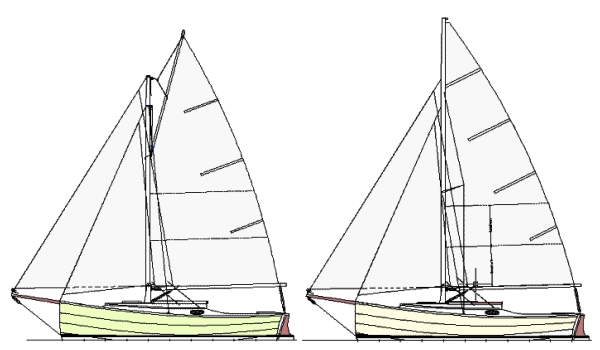 Building on the achievements of the Cape Cutter 19, the Cape Henry 21 looks like also becoming a popular little boat. Many of these boats are built from scratch but she is available as a plywood kit from suppliers in Australia, South Africa, Turkey, UK and USA. We include full size Mylar patterns of the bulkheads with the stock plans, to assist those building from scratch. We also offer optional Mylar patterns of the hull panels, useful for those builders who are concerned about cutting the correct shapes for the hull skin.Most builders who take on this project will learn some new skills along the way. That is one of the reasons why we build our own boats rather than buying. Any handyman of reasonable ability should be able to produce a Cape Henry 21 of which he will be proud.As of April 2009 we also have a bilge keel version of this design. This has slightly deeper draft than the centreplate version but it stands upright when beached and it has a clear cabin sole, without the obstruction of the centreplate casing. Stability is similar to the centreplate version with the plate down.

The keels are hollow steel casings, filled with lead ballast. They are canted outward so that the leeward one is close to vertical when heeled. They are asymmetrical and installed with some toe-in angle, to maintain windward efficiency. Patterns of the components of the keels are included in the plans for the bilge keel version 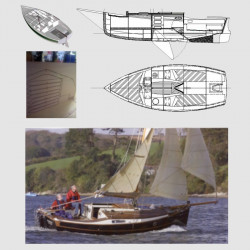 Pre-cut shapes on CNC from plywood sheets of Okoumè 250x122cm (see table) for: bulkheads, hull, deck, cabin and cockpit: Veneer parts are not included, more easily available in your  area. Delivery: about  4   weeks from order   you can buy the complete kit or divide it into two lots: order first  the bulkheads and then, according to your working times,... 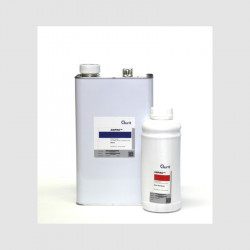 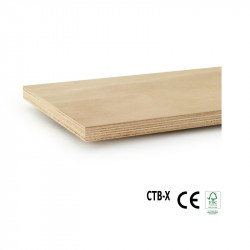 Marine plywood with excellent resistance and durability performance in conditions of extreme humidity and salinity.  Thanks to their unique water resistance, Okoumè marine plywood panels are the ideal choice for carrying out structural projects that require durability performance in a marine environment even in severe conditions. measures 122x250cm...

Price €35.00
More
 In Stock
5 other products in the same category: 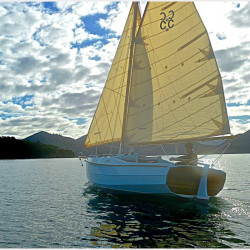 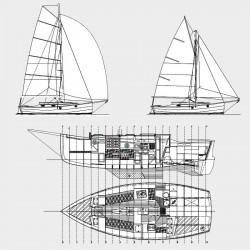 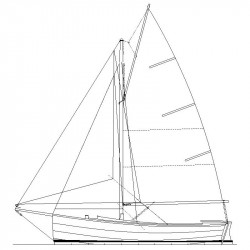 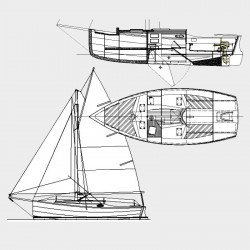 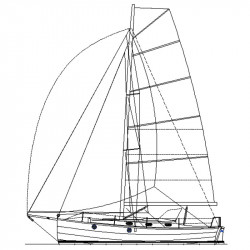